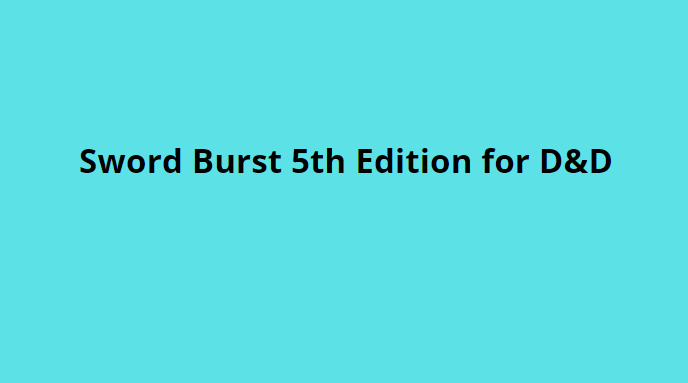 It is often deliberately worded. Their specifics are quite different:

Spectral blades are sweeping around you in a momentary circle. Unless you succeed in your dexterity saving throw, all creatures within range will take 1d6 force damage. When you reach the fifth level (2d6), the sword burst spell’s damage will increase by 1d6. At the 11th level (3d6), and at the 17th level (4d6), the damage will increase by another 1d6.
When you cast a spell that requires an attack roll, its range is doubled; .

Apart from that, I don’t have any issues with the build. As a “One Trick Pony,” he’s basically having the magician try a simpler cantrip; however, since the magician has to be in the thick of the melee to use it, it has built-in limitations.

I don’t know whether the range wording is intended, but it seems too specific to apply to sword burst and therefore the sorcerer’s ability to cast distance spells. The sorcerer could theoretically extend the range of a spell by using Meta magic distance, and in this case that may also result in an increase in the world of effect. You may determine however that the circle of blades is more like.  A ring of blades (which is what the outline implies), then it might not affect the immediate area around the caster. As for the cantrip, it would be a touch good to have the caster in the middle of an approximately 25′ diameter burst regardless of using a sorcery point.

You lose a spell slot if you roll a hit spell and miss. Thus, attempting to hit twice would waste two spell slots, and remains unreliable. Cantrips like this are frequently used by spell casters as they are primarily spells.
Against people you surround yourself with, it’s an AoE spell. Despite being a great multi-hit cantrip, it doesn’t benefit other classes too much. It can kill the foremost minions of a minion, like Stirges, because of its average damage of 3.5. A C for situational.

Cantrips abound, but this one isn’t great. There’s nothing special about it. I think it has a lot of potential, but it isn’t great. You don’t want to be in the position where Sword Burst is sweet when you’re playing a caster (or even an Arcane Trickster). I could see an Eldritch Knight using this.