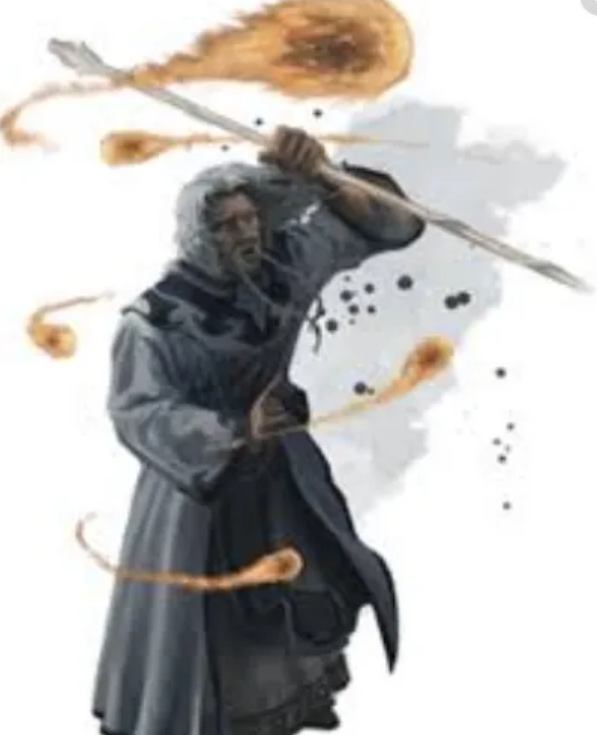 In your space, you create six tiny meteors. The demons float within the air and orbit you for the duration of the spell. Once you cast the spell – and as a bonus action on every turn thereafter – you will expend one or two of the meteors, sending them streaking toward an extent or points within 120 feet of you. When a meteor reaches its destination or impacts a solid surface, it explodes. There is a Dexterity saving throw required for each creature within 5 feet of the meteor’s explosion. On a failed save, the creature takes 2d6 fire damage, or half the damage on a successful one.

The number of meteors created by this spell increases by two for every level of spell slot above 3rd when it’s cast with a spell slot of 4th level or higher.

In place of the wizard’s normal weapons, this spell creates several small globes of fire, one for each level of experience the wizard has gained. Meteors are often hurled at targets up to 90 yards away and are treated as missiles, providing a +5 bonus to attack rolls. Each meteor explodes into a 1-foot diameter sphere upon impact, dealing 1d4+3 points of injury plus 3 points of fireside damage to all creatures struck by it. The wizard can hurl up to 5 missiles per round.

In the case of Assassins or Blackguards, “Melf’s Minute Meteors” are often combined with their “Poison weapon” skill. Summon six tiny meteors. When you cast a 5e spell, as a bonus action, you’ll gain two meters. When the meteor reaches its target, it explodes, causing damage to everyone within the explosion’s radius.

Upon casting this spell, the wizard can cast small globes of fireside (one for each level of experience he has reached), each of which bursts into a 1-foot diameter sphere upon impact, inflicting 1d4 points of damage to the creature struck. Additionally, it is capable of igniting combustible materials (even solid planks). The wizard treats the meteors as missiles and adds a +2 bonus to the attack rolls and removes the range penalty. It is treated as a grenade-like missile that inflicts one injury point on creatures within three feet of it.

The spell is often cast in either of two ways:

The spell actually creates six small meteors in your space. During a spell’s duration, they float around you in the air as well as orbit you. When you cast the spell- and also as a bonus action on each of your subsequent turns- as well as you will easily expend one or two meteors and also sending them streaking toward the purpose alternatively points that you choose within 120 feet of you.

When a meteor reaches its destination, it will impact against a solid surface and therefore explode. A dexterity saving throw should be made for every creature within 5 feet of where the meteor explodes. In reality, a creature will take 2d6 fire damage if it fails to save, or half that amount if it succeeds.
Read Also
Temple of the Gods 5e
Share
Facebook Twitter Pinterest Linkedin