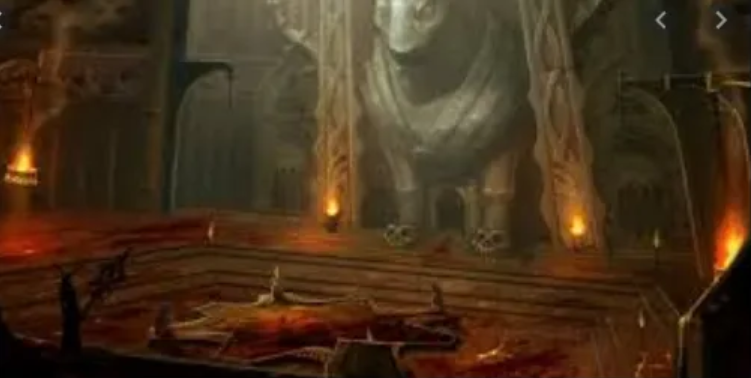 Within the parameters of getting an internal enclosed by walls, a ceiling, and a door, the caster could create any appearance he or she desired. An interior, which exuded the scent of burning incense, could have as many windows as the caster chose and any level of illumination. It could only be opened or closed by creatures designated by the caster.

Temples opposed one type of creature chosen by the caster, among celestials, fey, fiends, and undead. The creatures of the chosen type could only enter the temple if they resisted the spell’s repulsion, but they were hindered as if under the effect of a bane spell. In the temple, divination sensors tracking the outside world or people inside were blocked.

Temple of the Gods 5e

The temple’s structure extended into the Ethereal Plane, and the magical material inside was impossible to traverse. Dispelling magic and even antimagic fields could not affect it. It became impossible to destroy a temple of the gods because the only spell capable of doing so was disintegrated.

The spell lasted for 24 hours after which the temple disappeared. If the spell was cast daily at an equivalent location for a full year, the temple became permanent.

Within range, you will see a temple shimmer into existence on the bottom. The temple must fit within an unoccupied cube, measuring up to 120 feet on all sides. The temple remains until the spell is broken. The casting is dedicated to whatever god, pantheon, or philosophy is represented by the holy symbol.

All decisions about the temple’s appearance are up to you. There is a roof, a floor, and walls inside, and a door letting you access the inside, as well as as many windows as you like. Once you cast the spell, only you can open or close the door along with the creatures you designate.

Temples have an open interior with an idol or altar at one end. There are two options for lighting the temple: bright light or dim light. The air inside is filled with the scent of burning incense, and therefore the temperature is mild.

Casting this spell will cause the temple to oppose the kinds of creatures you choose. You may choose one or more of the following: celestials, elementals, fey, fiends, or undead. If a creature of the chosen type attempts to enter the temple, it must make a Charisma saving throw. A failed save prevents it from entering the temple for twenty-four hours. hours. The creature can enter the temple, but the magic there hinders it; whenever it makes an attack roll, a capability check, or a saving throw in the temple, it rolls a d4 and subtracts the number from the d20 roll.

Finally, whenever any creature within the temple regains hit points from a spell of 1st level or higher, the creature regains additional hit points adequate to your Wisdom modifier (minimum 1 hit point).

The temple is formed from the opaque magical force that extends into the Ethereal Plane, thus blocking ethereal travel into its interior. The temple’s exterior is impenetrable to everything. Dispel magic cannot dispel it, so the antimagic field has no effect on it. When the spell disintegrates the temple, it is destroyed immediately. By casting this spell every day for a year, the effect becomes permanent.
Read Also
Share
Facebook Twitter Pinterest Linkedin